MORE LIKE 50,000 WERE THERE TO PROTEST AGAINST THE TPPA

This Malay Mail reporter who wrote the article down below must either have been in the wrong place to be able to give the impression that the turnout at the protest against Malaysia signing the Trans-Pacific Partnership Agreement (TPPA) was so small.

I arrived at Masjid Jamek LRT station at about 4pm and came across this small black shirted lot which had broken away from the main rally who were at the junction of Jalan Tun Perak and Jalan Tuanku Abdul Rahman at 4.04pm 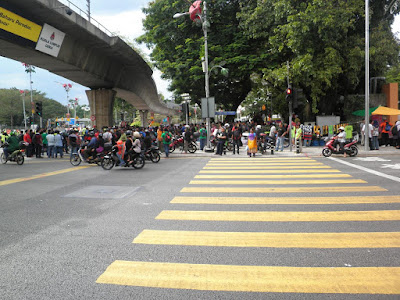 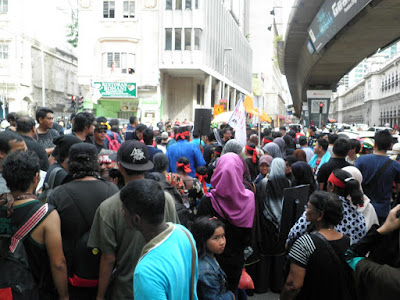 I noticed some Parti Sosialis Malaysia and PKR members and supporters amongst this group, along with what looked like some HIV-positive activists who object to the TPPA because it will potentially force them to have to pay for branded medicines, which is a valid objection.

I then walked on to Padang Merbok, where I came across the main body of the rally at around 4.21pm and it looked more like 50,000. 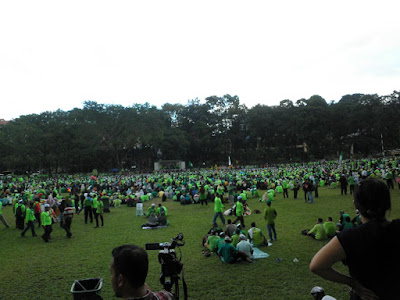 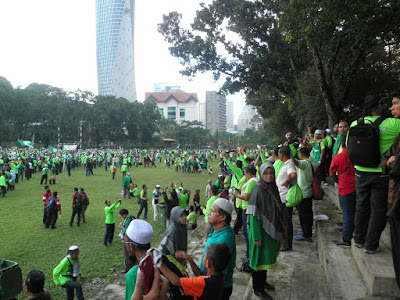 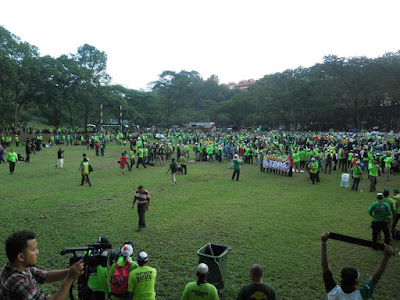 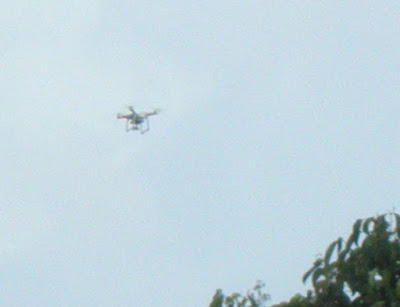 I guess this drone which flew over will give us a better estimate of the numbers present.

Of course, most of the people at the main body of the rally were PAS (Pan Malaysian Islamic Party) members or supporters but they welcomed anyone who opposed the U.S. imperialist TPPA irrespective of ethnicity, party-affiliation, ideology or religion and we must fight this together to have a chance to stop Malaysia signing the TPPA and literally sell Malaysia to plunder by U.S. imperialist interests.

By being sectarian, the small black shirted  group broke away from the masses and lost whatever opportunity to exert their influence amongst the masses, many of who are Malaysian ordinary workers, farmers and petty traders.

Also, this goes to show that you cannot believe everything you read in the media, such as misleading impression on numbers given by the article which follows below.

KUALA LUMPUR, Jan 23 — PAS and splinter group Parti Amanah Negara (Amanah) avoided each other in a show of lingering enmity at the rally against the Trans-Pacific Partnership (TPP) Agreement here today.

In the “Bantah TPPA” demonstration against the Pacific trade treaty that saw an estimated 4,000 protesters, PAS supporters began marching from Sogo Mall and settled at Padang Merbok in the city centre by 3pm, where they stayed for the next two hours listening to speeches by various political leaders.

Amanah supporters marched from Maju Junction Mall towards Dataran Merdeka, but stopped at Jalan Parlimen for an hour before backtracking back to the shopping centre.

The rally saw rancour among some PAS supporters against Amanah, with some of them shouting “Jahanam Amanah” (To hell with Amanah).

Amanah comprises progressives who left PAS after losing to the conservative faction in a bitter election in the Islamist opposition party last year.

No DAP leaders were seen, except for Charles Santiago who has repeatedly opposed the TPP.

Parliament is set to debate the TPP next week.

Critics of the TPP contend that the US-driven Pacific treaty, which involves a dozen nations, could lead to medicine price hikes, internet censorship and put small local enterprises out of business when they compete against large American multi-nationals.

Protesters at the anti-TPP demonstration dispersed peacefully at about 5pm.